In the world of front-end web development, there are three major players: React, Angular, and Vue. But for now, let's focus on the first two technologies. The main difference between the two is that React is a library while Angular is a framework. As a library, React comes with predefined code snippets for fast and standardized development. While Angular being a framework, provides a template or foundation upon which developers build UI components.

Due to this difference, both technologies have their own unique strengths and weaknesses. React is known for its simplicity and speed, while Angular is favored for its robustness and flexibility. So, which one should you choose? In this post, we'll take a look at the pros and cons of React and Angular so you can make an informed decision.

React is a JavaScript library for building user interfaces. It was created by Facebook and released as open-source software in 2013, making it one of the most mature front-end technologies in the market, with a robust ecosystem of users and supporting tools.

The library is commonly used for building single-page applications and mobile apps. It employs a component-based architecture that makes it easy for developers to debug and build customized UIs. Even better, these components are reusable, which helps speed up the development process. React is used by major companies such as Netflix, Airbnb, and Walmart.

Some of the notable features of React include the following:

React uses JavaScript syntax extension (JSX), a combination of HTML and JavaScript. The syntax is then processed by transpilers such as Babel, which convert it to JavaScript code for browsers. JSX is faster than the typical JavaScript code, which helps create a high-performance React app.

DOM is an object-based representation of the current view as seen by a user in the browser. Developers can manipulate it to change UI components and perform users' actions on web elements to accept users' requests. Developers can manipulate it is an important aspect of UI web development. It allows developers to modify UI components and perform users' actions on web elements. However, the entire page must be re-rendered once updated to reflect the changes. This process is usually slow, making your application appear sluggish and slow. s forced to re-render, this process is usually slower in most JavaScript frameworks as it involves updating the whole DOM at once, which impairs the performance of a web application. For example, if an app contains twenty items and a user only checks off three items, DOM will re-render the entire list to update the three items.

React uses virtual DOM to help improve application performance. When a UI is rendered, React creates a virtual DOM of that render and keeps it in memory. When there's a change, the virtual DOM is updated first and then synced with the Actual DOM. This eliminates unnecessary re-rendering of elements making your app appear to load faster.

React supports a one-way data binding or unidirectional data flow method. This feature allows developers to nest child components inside parent components. This way, the data can only flow from parent to child, meaning child components cannot modify the data alone. Developers, therefore, have more control over the application. It also makes it easier to locate bugs and debug errors.

React is made up of components that are used to build interactive UIs. These components are reusable and have their own logic and control. As a result, they make it easier to build and manage UI code for large applications.

React supports numerous extensions that help in building a full-fledged UI application. They also enable React to support mobile app development and server-side rendering. Some of the extensions include; Flux, Redux, and React Native.

Pros and cons of React

The advantages of using React include the following:

Angular is a JavaScript framework for building interactive UIs for web applications. It was developed and released by Google in 2010 as AngularJS. Since then, the framework has undergone several improvements, culminating in the release of Angular 2.0 in 2016. This new version uses Typescript syntax, which results in less coding and is thus easy to debug. Also, similar to React, Angular uses a component-based architecture, allowing you to divide UIs into functional and logical components that can be nested to build complex applications.

Angular supports both uni- and bi-directional data flow. Unlike one-way, two-way data binding means the data can flow from the parent to the child component and vice versa. As such, when you modify the data in the model, the view is updated to reflect the changes, and when the view changes, the model is also updated. You can opt to use one-way or two-way data binding based on the app you're building. 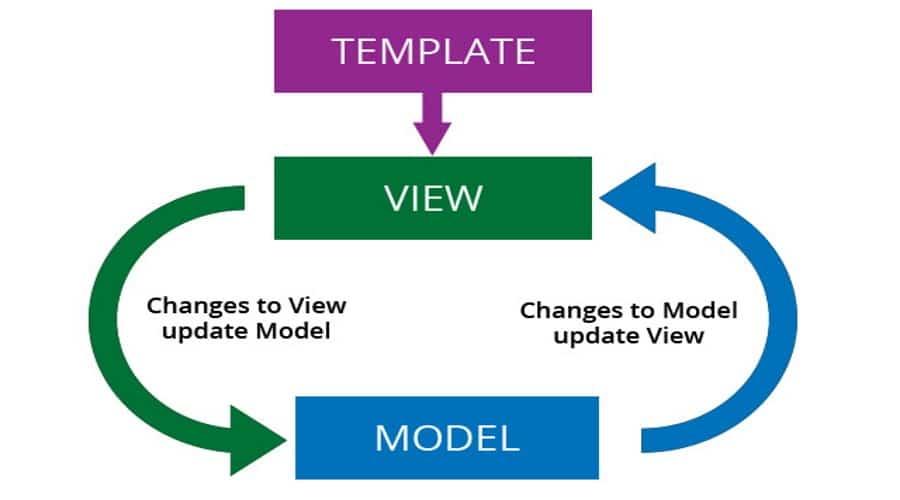 Angular comes with Ajax and HTTP support, enabling it to connect and communicate with backend services. This helps boost an app's performance and reduce response times.

The Angular command line interface (CLI) allows developers to initialize, scaffold, and maintain angular applications from a command shell. It also allows you to preview your application with LiveReload support.

Pros and cons of Angular

Advantages of using Angular include:

Generally, React apps boast better performance than Angular apps. This is because React uses Virtual DOM, while Angular only relies on the Real DOM. With the Virtual DOM, only the changed objects are updated without necessarily rewriting the entire tree structure, as it's the case with Angular's Real DOM. Also, by default, Angular supports two-way data binding. While this ensures model view and model are in sync, it impairs performance since the number of watched elements grows exponentially as the app increases in size and complexity. If you're aiming for high performance, React is a more suitable choice with added benefits of improved customer experience and SEO ranking.

State management involves managing data as a user interacts with the app. When a user triggers a request, the app's state changes, consequently changing the view. It's a crucial concept, especially when working with large and complex applications with multiple views/components.

React relies heavily on external libraries to build robust applications. The type of tools used varies depending on the project, so you have to invest time in choosing the right library. This might slow down the speed of development, leading to a delayed time-to-market schedule. Angular, on the other hand, comes with all the necessary tools to support full-fledged development. You don't have to rely on external libraries allowing you to focus primarily on building and deploying the app. Its CLI also offers developers helpful tools to automate certain processes instead of doing them manually.

Backward compatibility is the ability of a technology tool to work with both new and old architecture. React is backward compatible, meaning you update its old libraries and add different releases. However, Angular isn't backward compatible. You cannot jump from Angular 7.0 to Angular 13.0 without installing all other versions. As such, it's easier to update a React app than an Angular app.

In front-end development, scalability refers to the ability of an app to expand in functionality consistently. As your user base grows, your app needs to grow in size and complexity to handle the increased traffic.

Angular is more scalable than React, thanks to its modular development structure. It can support the sudden increase in app users, making it an ideal tool for building real-time applications. React, being less scalable, is easier to test.

React was launched almost five years after AngularJS was released. Despite being relatively young, React has a larger community of users than Angular. This makes it easier to work with React since you can easily find reusable components contributed by other developers.

When to use React

When to use Angular

Is React better than Angular?

React is better than Angular in terms of performance thanks to its Virtual DOM feature. However, Angular is more suitable for building large applications.

Is React easier than Angular?

Yes, React is easier to learn and use than Angular. The library runs on JSX syntax, meaning you can get started immediately if you already understand basic HTML and JavaScript. With Angular, you need to invest time in learning Typescript -- a JavaScript superset. This explains why there's a larger pool of React developers than Angular.

React, and Angular are suited for different use cases. React offers better performance than Angular. However, the latter is more suitable for building large applications due to its scalability and capacity to handle unprecedented spikes in app traffic. That said, the right tool depends entirely on your project requirements.

Our team recently jumped in to help a headless eCommerce project that was heading in the wrong direction. The team had…
Tim Davidson
11 min read
Development

Next.js vs Nuxt.js - Is There A Clear Winner?

Nuxt vs. Next: Which One Should You Use? When it comes to building scalable, interactive web applications, Nuxt and Next…
Tim Davidson
10 min read